We worshipped at the church where the Reformation officially began 501 years ago this past week. I was expecting a much more humble birthplace for the Reformation. That comes from the legends I have heard of Luther’s father being unhappy with his decision to take Holy Orders as opposed to the more financially lucrative career in law that was planned for him, and with the seemingly obvious thought that the vow of poverty would mean that the church was meant more for the work of the Gospel than for a place to be adorned. Like so many things, the reality is not always the same as the mental picture we paint.

The congregation was larger than attends on an average Sunday at Grace, but not by many. Worship was “in the vernacular,” as Luther would have had it, but in this case that was German, so I was left to look at the format and structure of the service. The sermon was 23 minutes long and delivered from a high pulpit. The children (there were about 8) were led out for “children’s church” right before the sermon. They collected 2 offerings. One at the usual place in the service and another “for the work of the congregation” as people exited.  This may have been where it all started, but it is not a place where the church is flourishing anymore than any place else I have been. 15% of the city’s residents claim to be protestant and 80% claim no religious affiliation at all. Some of that may be a result of 51 years of socialist rule that promoted atheism but still the numbers are striking.

I would like to say that I was completely enthralled by the whole experience but I was not. Yes the structure was exquisite. Yes Martin Luther and Phillip Melancthon are buried in the back of the sanctuary. Yes this is where Luther attached his 95 Thesis Against the Sale of Indulgences.  Here is where it all began. Still for me it was not really a “spiritual” pilgrimage. Instead it was an affirmation of how much of a transition we in the church are in the midst of! There was something very empty about Castle Church. That emptiness felt a little too familiar.

Luther had a sense that the Reformation was to be an ongoing pursuit. There was a time when the church was at the center of community (quite literally). The pastors were not simply preachers; they dispensed charity, served as attorneys, took in orphans, taught children and legislated morality. Most of those roles are gone, maybe rightly so, but the change that we are in the midst of now could be even more profound than the Reformation that began 500 years ago.

The church seems to be becoming more narrow in its focus. More spiritual and less physical. The best of music and sermons can be downloaded to your phone to be watched or listened to at your convince. There are agencies that specialize in all those charitable and social functions that were once filled by the church. If you have a spiritual or biblical question, you can search Google or post it to FaceBook and find more answers than you can read.

I visited the home village of my earliest known Scottish ancestors. The church no longer has a pastor or worships as a congregation, the building is owned by “Friends of Forgue Kirk,” the graves are in the cemetery out back. The stone is unreadable, the site of the house where they lived is a barely evident pile of rocks, which would have been unrecognizable if it were not for a kindly gentleman we met at the cemetery, he knew were Pennyburn was, but you could sense that knowledge disappearing with his generation…

The physical disappears. The structures that we come to depend on fail. The people we depend on fail. It seems like hope is lost. The last stanza of Martin Luther’s hymn “A Mighty Fortress Is Our God,” might be appropriate. Sometime in the past the title was added to the tower of Castle Church. It looks and maybe even sounds like the church is the fortress, but really it is the Church. And that is not really about structure at all.

“God’s Word forever shall abide,
no thanks to foes, who fear it;
for God himself fights by our side
with weapons of the Spirit.
Were they to take our house,
goods, honor, child, or spouse,
though life be wrenched away,
they cannot win the day.
The kingdom’s ours forever!”

Hope is not lost! 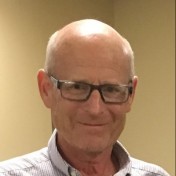 Pastor Scott Duffus served the Grace Lutheran Church congregation in Tripoli from 2014-2019. Prior to his time at Grace, he served as an intentional interim pastor assisting various ELCA congregations throughout the Midwest as they faced a variety of issues and challenges.