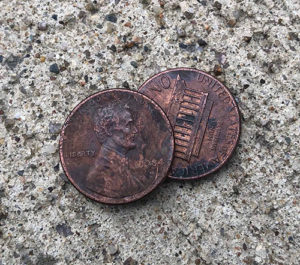 It’s just my 2¢. It is one of those deceptive phrases. Two cents is not much money but whenever I hear someone “add their 2¢” it is always something that they value more than a couple copper coins! So it was when the widow contributed her 2¢, the gift was significant beyond its monetary value.

Jesus was more than a little critical of some of those who were the active church attenders of his day, the scribes and Pharisees in particular. His criticism was that they had lost too much of a sense of what faith was really about.  Instead of being a call to service, it became a matter of showing status and all of the power and privilege that went along with it. He compares the much larger gifts of the rich to that of a widow who places 2 copper coins into the temple treasury, and astonishingly suggests that the widow has given the greater gift because she gave everything that she had; she committed everything.

In many ways I think the reality of what the church is facing is a matter of commitment. I think that even among those who still consider church important, it has been slowly moving to the margins in terms of our priorities. A book I have been reading says this:

“Most churches (with a few obvious exceptions) are drying. Extracurricular activities from music lessons to sports participation are considered by most parents to be more effective at forming good character… than church. Spirituality has become wildly popular but so deeply individualistic that the fastest-growing “religious affiliation” among this under 30 are “none” and “spiritual-not-religious.”*

This is a question I have been asking myself lately: What does it mean to be the church today when it appears that we are no longer going to be the social and spiritual center of the community? I fear that the legacy we have inherited looks back too much and is too “practical.” The church has become maybe too much a building to be maintained, too much of a series of programs to be offered,  and our mission has become too much of a matter of raising enough money to keep it all afloat. The widow’s offering is particularly poignant in all of this because Jesus recognizes commitment over content, faithfulness over results. The faithfulness of God and our own commitment are particularly significant in the midst of change.

As most of you know, I believe that the church is in the midst of very significant change. I think we will need to see ourselves more as an evangelical outpost than a religious institution. That is a risk-filled reality that will involve all sorts of experimentation, reprioritizing, failure, and regrouping. It sounds a bit like parenting in the digital age! Everything has changed and there is only the vaguest of directions to follow. Still, there is hope, and there is a God who calls us, like the widow, for the sake of the Gospel!